The sitar is the most popular stringed instrument of Hindustani Classical Music, and due to the work of musical ambassadors like Ravi Shankar and the general appeal of Indian Music, has become well known worldwide. In this article we will give an overview of this unique and delightful instrument.

Classical Music in India is an oral tradition and goes back thousands of years. Since there is not much written record, the origins and age of the sitar are unclear.
The oldest plucked stringed instrument of India is the Vina (Bin) The current incarnations are the Rudra Vina in the North and Saraswati Vina in the South. Both have long necks with frets attached. Like the sitar the Rudra Vina uses 2 gourds as resonating chambers. There are long necked lutes (vinas) depicted in 9th and 10th century temple sculptures. As far back as the 11th century there are stories and drawings of musicians in the Moghul courts playing a long necked Middle Eastern lute call the tambur.
Folklore attributes the invention or introduction of the sitar to Amir Khusro, a famous musician of the 13th century. However there was also an Amir Khusro in the 18th century and this is closer to the time when there is documentation of sitar performance.
There was a lot of Persian influence in Hindustani music and there is a 3 stringed long necked instrument in Persia called the "setar" or "three strings" So it seems reasonable to say the modern sitar is some combination of the Persian setar, the tambur and the Indian Vina.
Early drawing of Indian sitars show a much smaller instrument with fewer strings than the modern one. Different sizes and design proliferated for centuries. The current "standardized" sitar is fairly new.

All sitars are made by hand, usually by craftsmen whose families have been doing it for generations. The measurements of each sitar will be slighly different since the starting point is a large gourd, which, of course, can't be standardized.

The main resonating chamber is made of a large gourd (tumba), cut and sometimes reshaped. The face (tabli) is cut from a piece of wood to fit that tumba. The long hallow neck (dandhi) is made from 2 joined pieces of wood. The neck is joined to the tumba by a carved piece of wood (gullu) Once all of this is assembled, the desired decoration is carved, and the tailpiece (langot) is installed. Then the instrument is sanded and sealed and finished (french polished) over the course of several days.
When the finish dries, the main tuning pegs (kunti) are put on and the main bridge is installed and shaped correctly (see jawari). Then the frets are tied on and correctly positioned to be in tune. Finally the holes for the sympathetic pegs are drilled in the side of the dandhi and those pegs are installed.

Most sitars are made of toon wood (a kind of mahogany) Some older sitars are made from teak wood. It is important to distinguish the aged Burma teak of these instruments (which is no longer available) from the Indian domestic teak that is sometimes available. Toon is preferable to this.
The best gourds come from the area around Miraj in the state of Maharashtra. The climate there is best for the large even gourds needed for sitars and tanpuras, and all the best makers get their gourds from here.

The distinctive sound of the sitar (and the tanpura) comes from the jawari (or jivari). The word comes from combining "sawari" (saddle) with "jiv" (life) and getting "jivari" (saddle which gives life to sound)

On a guitar or a violin or sarod, the string attaches to the bridge at one distinct point. On a sitar the bridge is wide and curved. The string sits flat along this bridge and actually leaves the bridge at different points as it vibrates up and down. Thus there is a very small change in string length as the string vibrates, allowing us to hear different overtones. 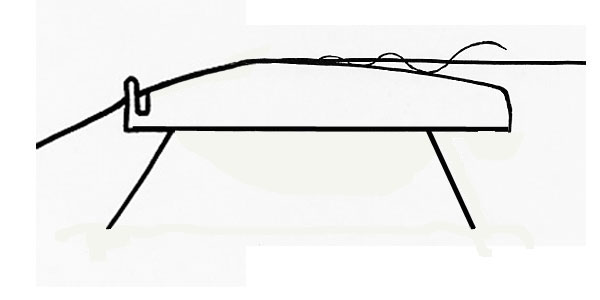 Traditionally the sitar bridge was made of antler. But that is hard to get these days so most makers use camel bone or some kind of synthetic material or plastic.
If you are using anything but the hardest platic you will wear grooves on the bridge which evenually ruins the original sound of your jawari. Getting the right shape for a new jawari is a highly skilled job which takes a lot of practice to get right.

Mizrab is the two sided wire plectrum worn on the index finger of the right hand. These picks were invented and originally used by Vina players centuries ago, who often wear them on more than one finger.
Their adaptation by sitar players lead to increased speed and clarity and expanded the range of the instrument. The word is derived from the Arabic word "zarb" meaning "to strike".

These days there are 2 basic styles of sitar: Kharaj Pancham (KP) or "Ravi Shankar" and Gandhar Pancham (GP) or "Vilayat Khan" style. There are slight differences in tuning, design and sound. The KP sitars usually have an extra tumba (gourd) and produce a more Vina like sound reminiscent of Ravi Shankar. The GP sitars lack the upper gourd and produce more of a "gayaki" or singing sound associated with Vilayat Khan. The differences are not stark, and many sitars falls somewhere in between on this spectrum.

The main difference is that the Kharaj Pancham style has 2 extra bass strings: Low Pa (Pancham) and Low Sa (Kharaj), The Gandhar Pancham style lacks these strings but adds an extra chikari string that is usually tuned to Ga (Gandhar) to go with the Pa (Pancham) and 2 Sa's chikaris that both styles have.
Both style sitars have 7 main tunings pegs. On the KP there are 4 playing strings Ma, Sa, Low Pa, Low SA, and 3 chikari strings, tuned Pa, Sa, High Sa. On the GP there are 2 main playing strings Ma and Sa and 4 chikaris" Ga, Pa, Sa and High Sa. One peg is usually left empty.

DESIGN
Kharaj Pancham sitars usually have an upper tumba. This adds balance but more importantly brings extra sound back to the player, producing a "stereo" effect, especially when playing the 2 bass strings. These days many sitars use a spun wood bowl for the upper tumba. We find the effect is heightend when a real tumba is used.

JAWARI
This is an important difference. As we explained before, the unique sound of the sitar comes from the jawari, the way the string vibrates on the curved bridge. Different curvatures highlight different overtones and produce different sounds, different degrees of brightness, buzzyiness, warmth and sustain.
Kharaj Pancham sitars usually have what is called an "open" jawari. There is a long and wide rounding of the bridge, creating a gradual dropoff between string and bridge. This makes a sound rich in harmonics and also loud and buzzy.
Gandhar Pancham sitars usually have what is called a "closed" jawari. There is a short, steep rounding of the bridge so there is less space in the drop off between string and bridge.This creates a warm sound with less, or no buzz.
Within a preferred style, there can be a range of jawari preferences. Ravi Shankar's sound was very "buzzy". Nikhil Banerjee's sound was much less so. This is a difference of jawari.

Traditionally these 2 different designs highlight different playing styles. The KP is more obviously related to the ancent Bin and it's Dhrupad style. The approach to Alap and Jor are very much rooted in the Dhrupad style. The added bass strings help evoke this in the alap. The GP is rooted in the Khyal vocal style and is often call the "gayaki" (singing) style. Again, this distinction is not carved in stone. Many people play in a "gayaki" style on a KP sitar, and many people play with a Dhrupad approach to alap on a GP sitar.

Most makers make a range of sitars, from what they would consider a simple beginner's instrument to what they would hope a major artist would play in concert. Usually the later are more decorated and, more importantly, use better, more seasoned wood.