Guide to Buying a Harmonium

When buying a harmonium you can narrow your choice by deciding what options you want. Basic choices are:

Portable harmoniums fold up into a suitcase-like box ½ to 2/3 of their regular height. There is a handle in front so they can be carried with one hand like a suitcase. If you are traveling around a lot with your instrument this is an attractive option, since it’s lot easier to carry a harmonium this way than by the two side handles of a regular harmonium. If you’re not, then it’s just another moving part. In general, you sacrifice no sound by getting a portable.

Scale change harmoniums have a mechanism that allows you to slide the keyboard up to four half steps left or right. So if you are used to always playing in B flat, and the song is in C, you just shift the keyboard up two half steps. This is not a feature you need if you can play easily in different keys, or if you will always be playing in the same key.

On the other hand, some proficient keyboard players have told us they prefer to always play from B flat because of the way their hand sits on the keys in that position (harmonium keys being smaller than piano keys). Keep in mind that what most makers consider their best instrument is a three reed scale change model.

Most harmoniums have two or three sets of reeds per note. See below for how these reeds can be voiced. Double reed instruments can be great, and all you need. A triple reed instrument will give you a fuller sound and more flexibility.

Most makers make some models that are slightly smaller and lighter than what is considered a normal size instrument. These are usually double reed, non scale-change harmoniums. The Bina 23b is an example of this style. These instruments often suffice for one voice. 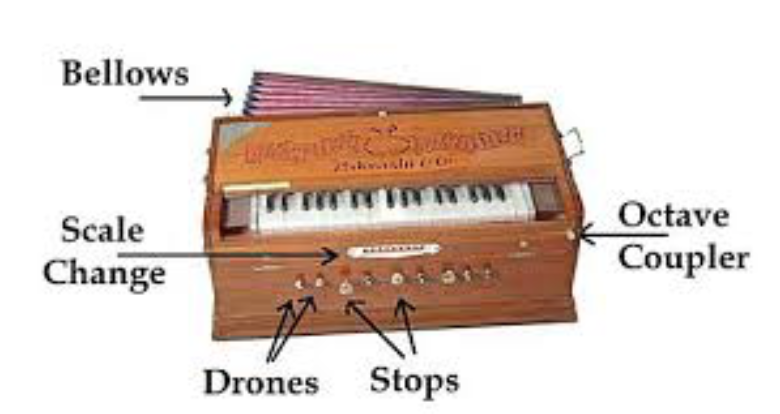 Looking at the harmonium from the front there is a row of knobs, usually some larger than others. The large knobs are the stops. They open and close the air flow to the air chambers inside. (There is often some redundancy – a harmonium with 2 air chambers can have 4 stops) If you have a harmonium with 2 sets of reeds, and thus 2 air chambers, you can set your harmonium to play only one set of reeds if you desire some difference of sound texture. This is one reason some people prefer a triple reed harmonium. In reality, though, most people just keep all the stops out all the time.

The smaller knobs in front are the drones. They play a fixed note drone when pulled out. Most harmoniums come with drones that are the black keys on the keyboard (C#, D#, F#, G#, A# or some combination thereof) We can customize the drones for you, for a small additional cost.

Inside each harmonium are two, three or four air chambers corresponding to the number of banks of reeds. Each air chamber isolates a bank or reeds. These banks of reeds are usually set in different voices or timbres, so when you play one note you are getting two voices on a two bank, and three voices on a three bank. With a coupler engaged the number of voices will double as the key an octave above (or below depending) is depressed automatically by the coupler mechanism.

Generally, reeds come in 3 different voicings covering 3 different octaves: bass (B), male (M), and female (F). Bass reeds are the lowest, male reeds are an octave higher, and female reeds one more octave higher. A double reed instrument will usually be voiced B/M or M/F . A triple reed instrument can be voiced B/M/M, B/M/F or M/M/F. Different voicings produce harmoniums with different timbres and sustain. Bass reed require more air, so a B/M/F instrument will have less sustain than a M/M/F instrument, but will be louder.

Harmonium reeds are made of either copper or brass. Brass reeds have a louder, more penetrating sound. They are popular for kirtans and bhajans where often a number of people are singing vigorously. The brass sound helps penetrate these voices.

Copper reeds tend to a warmer, softer sound and are often used in more expensive harmoniums geared towards ghazals and classical performances.

The bellows pump the air into the instrument. There is also an internal bellows which pushes the air up to sound the reeds. Bellows can be 2-fold, 3 fold, or 7-fold. Two and three fold bellows are attached at the bottom. Seven fold bellows can be attached on either side to allow for left or right hand pumping. The number of folds, by itself, does not determine the quality of the instrument. However, most fancy harmoniums have 7-fold bellows. Some people say that the 7-fold bellows allows for more control. Some bellows have a spring, which pushes them open after you have pumped in.